"I am an invisible man. No, I am not a spook like those who haunted Edgar Allan Poe; nor am I one of your Hollywood-movie ectoplasms. I am a man of substance, of flesh and bone, fibre and liquids--and I might be even said to possess a mind. I am invisible, understand, simply because people refuse to see me. Like the bodiless heads you see sometimes in circus sideshows, it is as though I have been surrounded by mirrors of hard, distorting glass. When they approach me they see only my surroundings, themselves, or figments of their imagination--indeed, everything and anything except me."
Ralph Ellison, Prologue, Invisible Man 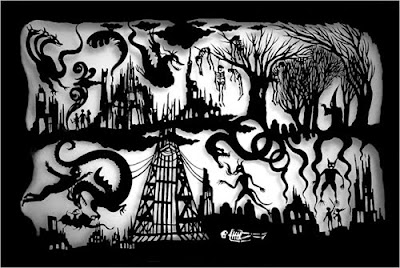 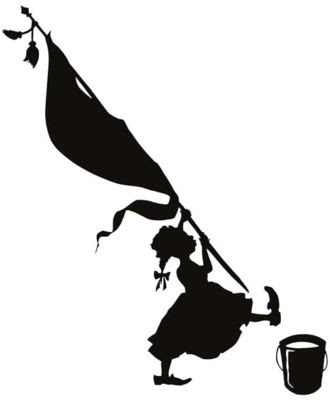 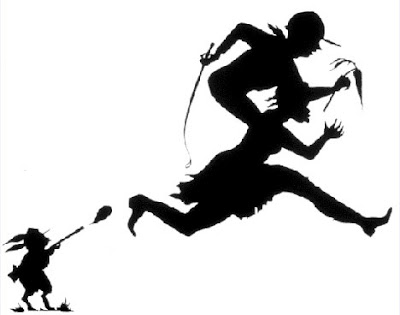 I was first introduced to Kara Walker's work by one of my tutors when I was making an installation that involved shadow. From the first image of her work, I was hooked, especially the room sized installations involving life sized cut-out, silhouettes and shadows. I found it instantly attractive, almost theatrical, story-bookish. Then when I realised the message that her work was conveying,I was drawn-in even more. This was exactly what I was attempting to do with my installation. I wanted that same ambiguity, something that seemed familiar and comforting, and yet on closer look had a more unnerving message. I don't think that Walker is going for the shock element in her work. I'm sure that this is just a story she feels she has to tell. To re-address the balance a little.
Re-visiting the work of Kara Walker reminded me of another American artist, Kerry James Marshall, who had an exhibition at Modern Art Oxford in 2006. Which coincided quite fortuitously with a module that I was studying related to political art with reference to the Civil Rights Movement of the 60's in America. Having just read Invisible Man by Ralph Ellison, which subsequently became one of my all time favourite novels, I was totally up for the debate about his huge painting, Two invisible men naked.
If you are unfamiliar with the piece. I'll attempt to briefly describe it for you. I can't find an images of it. It consists of two large panels, one painted a kind of off-white. The other appears to be blackish brown, apart from two bulging eyes and a set of grinning white teeth. If you look carefully into the black painting, gradually the figure of a man emerges in the same colour as the background. However long you look into the white canvas, nothing will appear.
I vividly remember a group discussion at uni about the exhibition. One of the other students seemed quite annoyed about this piece. She thought it was a joke, a waste of time. Was he playing with us, what was it all about....couldn't he paint? I'm not a great one for public outbursts, but fired up with recent reading, including Invisible man, I couldn't help but speak out. Didn't she realise, that was, just, how Marshall felt, when looking through the record of art over the last hundreds years, and finding himself to be invisible.
I think I've said enough. This film Cut and Construct by Candace Kita about Walker's practice does an amazing job of introducing her work to us.
"Being invisible and without substance, a disembodied voice, as it were. what else could I do? What else but try to tell you what was really happening when your eyes were looking through? And it is this which frightens me:
Who knows but that, on the lower frequencies, I speak for you?
Ralph Ellison, Invisible Man p581 (last page)
ps. If this film is being cut in two you can link to it here.
Posted by debby emadian at 02:43