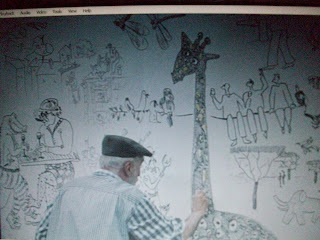 I watched Jardins En Automne this weekend, it's a really surreal film with lots of unusual things going on, and some amazing scenes. Like one in a little bar where the customers doodle on the walls, whilst the owner plays with his collection of old wind-up toys.
It was made in France in 2006 and directed by Georgian director Otar Losseliani. I borrowed it from the library to play on the laptop whilst drawing. But it's subtitled and there's so much going on, that it was difficult to watch and draw at the same time, so ended up keeping it for two weeks. Really worth watching.
Posted by debby emadian at 16:56