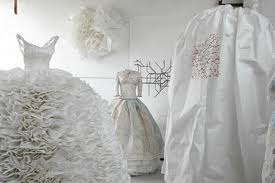 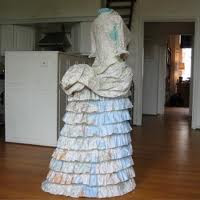 Susan Stockwell produces beautifully crafted objects that you'd expect to see made out of textiles. For example, a Victorian dress complete with bustle made from Ordnance Survey maps which is entitled Empire Dress and a similar piece Trayne, is made from used coffee filters. These were produced to comment on British colonial history and are influenced by her own heritage. Other works are a mattress and quilt both made from recycled Mills & Boons books. Stockwell acknowledges that her attitude towards this genre was slightly altered by the process of working with, and reading, these books.
Quilting is a technique that Stockwell has used in her work Imperial Quilt, that was first shown in her solo exhibition Stitched-Up: Paper and Politics. It was comprised of a quilt made out of world maps that had been cut up into small squares and then stitched back together, with the US forming the border and Washington and the Middle East being placed in the centre of the work. Also to produce a piece of artwork for the recent Quilts 1700 -2010 exhibition at the V & A Museum in London. Entitled a Chinese Dream that was made out of paper money. Here's an interview she gave for the exhibition and a little more insight into her work.

A Chinese Dream by Susan Stockwell from Victoria and Albert Museum on Vimeo.