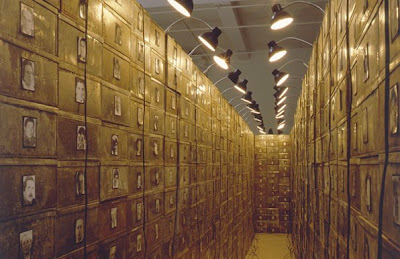 I've been fascinated with the emotive artwork of French artist Christian Boltanski since experiencing his installation Dead Swiss. I think it was at Tate Modern in 2004 or 5 when I first stumbled across this melancholy work in the permanent collection. As is often the case I was both compelled and also a little repelled by this piece. There always seems to be an element of sadness in whatever he does and a slight obsession with death, but it's not overwhelming. 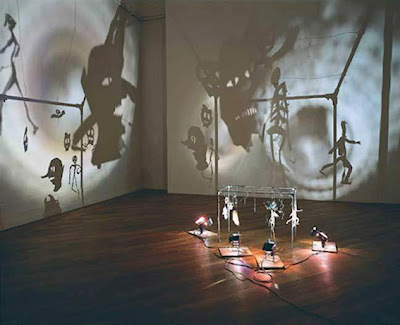 I'm not sure why but with most of his pieces, especially those involving light which many of them do; I'm always taken back to a moment. It was a beautiful sunny day in Montmatre, Paris. As I stepped out of the brilliant, brilliant sunshine into the darkness of the Basilica of Sacre Coeur a beggar thrust out a little begging cup in front of me. I'll never forget the shock of that second. I was moved in an instant from the bustle of life, light and sound and suddenly thrust into the antithesis, a dark hole and this person accosting me. I was momentarily blinded. He could see me, my dark silhouette against the halo of light as a I came through the door. He was invisible in this dark hallowed silence until he spoke. Gradually the welcoming light of hundreds upon hundreds of candles became visible. It wasn't his fault poor man, he was probably starving and sheltering in the cool church from the baking heat of the sun. He just really scared me and I think that churches can be very creepy buildings.
I always get that hallowed sense with Boltanski's work. I also experienced that same shock of discovering Dead Swiss as with the Basilica encounter. It was juxtaposed against vibrant work in a lively bustling contemporary art gallery. The shock came on discovering the subject matter. These images of people young and old were no-longer here. These were images of names from obituary columns in Swiss newspapers. Although my instant reaction on learning this was to walk away, I was compelled to stay and find out who they were. Then questioned myself as to whether this was morbid like people who slow down on the motorway to stare at the victims of horrific road accidents.
I decided that like Boltanski, I was remembering them, even though I'd never met them. Because a person is no longer here that doesn't mean we shouldn't get to know them. We do that all the time with great writers or scientists. Why not with ordinary people. That's what he was saying. Then I felt it would be rude to walk away, almost disrespectful. 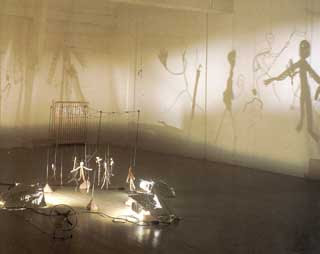 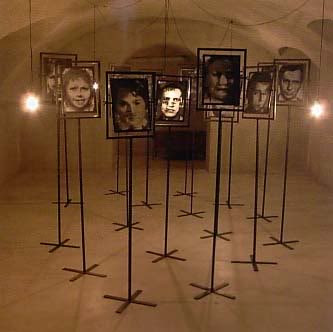