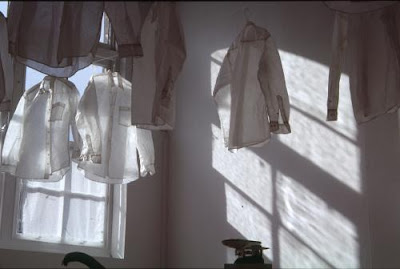 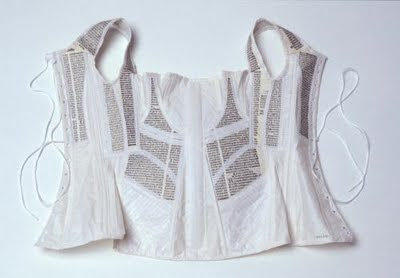 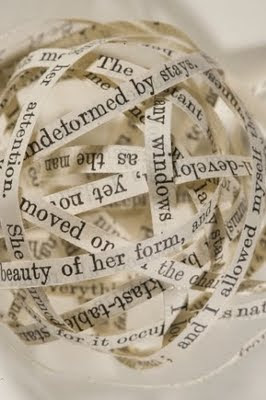 Thought On A Meeting 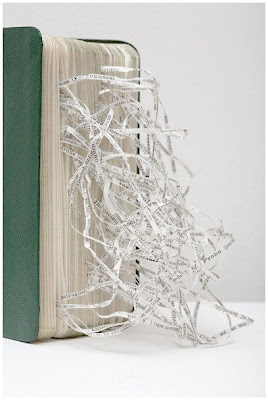 I think I stumbled across Ellen Bell's work about five or six years ago. I'm pretty sure that it was in the contemporary craft magazine Craft. Then last year on a stand at the Affordable Art Fair in Battersea represented by Four Square Fine Arts. Or maybe it was 2008. I just seem to lock into any work that involves paper like some kind of homing device, and when there's text....even better.
The first image of Bell's work that I actually saw an image of was probably, A Restraining Influence, which is a corset decorated with text. As with all her work the text isn't purely for decoration but the content of that text is intrinsic to the work. In this piece Bell uses text from an 18c bible and says that she is:
"making connections between the restraint perpetrated on women by religious ideology and by cultural ideas of body shape."
A concept which continues to be a topic for debate
Sleeves Notes made in 2001, is a gentle ghostly installation this time using tissue paper. It was the first time that I'd seen this piece of work by Bell and wouldn't have instantly recognized it as hers. But it rapidly became on of my favourites, along with the book piece.
you can see more of her beautifully aesthetic work on the axis website here
Posted by debby emadian at 02:19