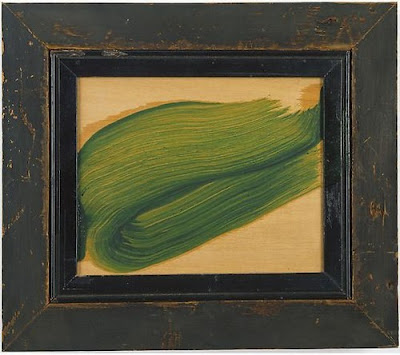 Leaf, 2009
I managed to make a flying visit to the Howard Hodgkin exhibition, Time and Place at
Modern Art Oxford,
yesterday, which runs until 5th of September.
His current body appears to be naive and easy to read. Unless I was missing out some deeper meaning. The pieces are very tactile, painted on what look like huge reclaimed doors or table tops which actually become part of the work. The only problem is that I did my usual thing and got reprimanded for touching! I was totally compelled to just stroke the wooden border.......not realising that it was actually part of the work, or how valuable they are.
Which reminded me of a similar experiences a number of years ago when trying to work out how a steel bath tub that was part of a Joseph Beuys exhibition had been attached to the wall in the Pinacoteca gallery in Munich, a very scary lady dressed in black, similarly chastised me....even though I hadn't even touched it....Honestly, I was just looking that time. Although I do think that it's a shame that such works can't be enjoyed by more than one sense. Saying that though ........I do seem to remember that with the Beuys exhibition more that one sense was involved.......in fact it was assaulted. The smell of lard in one piece was quite repulsive.
But getting back to the Hodgkin exhibition. The links to landscape and nature are very obvious in his work. In this light the MAO leaflet compares Hodgkin's work to J.M.M. Turner whilst Jonathan Jones of the Guardian likens his painting to 'the tradition of Gainsborough.' I have to say that I felt that it was more in the tradition of a child's painting. I don't mean that in a negative sense It's just this primitive quality in his work that make it so appealing to me.
Interestingly a related exhibition has been curated at the Ashmolean running until the 28th of September of paintings and drawings from his private collection. It's entitled Royal Elephants from Mughal India. Hopefully I'll get to see it within the next couple of weeks.
Tea Party in America is a lovely small early example of his work in the collection of Modern Art at the Ashmolean. If I'm not mistaken, I noticed last week that it's actually reproduced on the back of the menus in the amazing new roof top restaurant there. 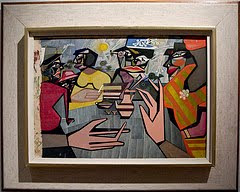 Howard Hodgkin will be in conversation with Andrew Graham-Dixon at Modern Art Oxford at 7pm on 26th of August.
Posted by debby emadian at 12:17